4 Steps to Outwit a Jerk 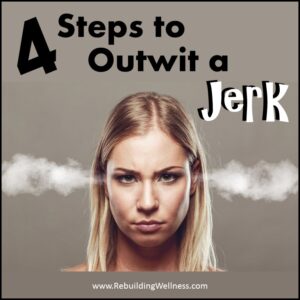 Have you ever had to deal with a jerk in your life? At work, in your neighborhood, or even in your family circle, a jerk can turn up the volume on your fibromyalgia and chronic illness pain symptoms. Don’t let a flare get the best of you.

The comments or barbs spoken by someone who’s careless with your feelings actually cause pain. And, it’s not just emotional. There are physical aspects, too.

The Physiology of Hurtful Remarks

Has anyone ever said something to you that makes you cringe? You may have responded with these external responses –

If so, you also experienced internal responses –

Whether your response is external or not, the internal responses apply. And, they have a negative physical impact.

A Jerk in Action

Now that you’re aware of your reactions, let’s take a look at what a jerk looks like in action.

I recently read a local chat thread from someone nearby. She posted a heartfelt plea for help with finding a lost pet. As usual, my lovely neighbors jumped in with relative questions and supportive comments.

One person posted something horrid, insulting, and completely unnecessary. When called out for being a jerk, he used the tried and true statement, “I’m just calling it like it is.”

But, was he really?

No. He was posting a worst-case scenario borne of his own imagination. He didn’t know the location (much less the demise) of that pet any more than anyone else. And, his conclusions had no more basis in reality than anyone else’s. He simply intended to stir things up.

In my book, he’s the definition of a jerk; insensitive, crass, and socially inept. This type of comment is unfiltered and thoughtless.

What Defines a Jerk to You?

To differentiate a jerk from a bully, a jerk’s comments or behaviors are indiscriminate. He or she isn’t intentionally trying to attack one person or one group in particular. A jerk is simply thoughtless, arrogant, insecure, and unaware. Of course, this doesn’t mean it isn’t hurtful.

But, what’s your definition?

Whatever your definition, know this: Your body tells you when you feel someone is behaving like a jerk. Listen to what your symptoms have to say.

(I should clarify that I’m using the term “jerk” to refer to a person whose words or actions have caused hurt in someone else. This label applies to the behavior and not the person as a permanent label. The person has the choice of whether or not to act like a jerk.)

This sounds like a dumb question. Because of course, an unwanted, unnecessary, and unhelpful comment can hurt. But here’s the truth of the matter. Most of the time, there’s a percentage of the comment that’s based in truth.

That’s why it hurts so much. The truth may be wrapped up in so much nonsense that it’s hard to see. But there’s still a kernel in there that’s either actually true, or you fear it’s true. Either way, the dagger finds its mark.

This is my favorite Eleanor Roosevelt quote to illustrate this point.

“No one can make you feel

inferior without your consent.”

This means that a snide remark or an insult hits home because we’ve somehow “bought into” the notion that it’s true. Or, at least partly true. You have to be a willing participant (whether conscious or unconscious) to feel the insult.

Even if there’s just a smidgen of truth, it still stings. As a reminder, it doesn’t even have to be completely true. The key is that you believe it is so. Or, fear it is so.

Once we can separate that small point from the intent, we can decide on what action to take. Going back to the intention is the space that gives us objectivity. And from an objective stance, we have the ammunition we need to hit it head on.

4 Steps to Outwit a Jerk

There are lots of ways to deal with a jerk – but the intent of this article is to focus on YOUR benefit. Shine the focus on your health and not on the other party.

Here are the steps to take the next time you’re faced with a jerk. FYI, I’m arbitrarily using the term “he” in these examples. As we all know, jerks come in all shapes, sizes, and genders.

First, start off with a disarming thank you. Thank the other person for the comment.

It’s actually none of their business why you thank them. But here’s why it’s important to you. This is an acknowledgement of the benefit to YOU. Their comment or behavior helped you to define your boundaries and take action by supporting your own beliefs. You got to define your own safe space and defend it. Well done, YOU. Their comment also gave you the opportunity to gain perspective and perhaps think of the topic in a new or different way.

After thanking the person, take this time to articulate your response. You are not defending or explaining your position. You’re simply stating your thoughts in a clear and concise manner. Now, you’re done! Whew! Wash your hands of the circumstance and mentally, if not also physically, walk away.

If the other person wants to take your reply and run with it – let him. Let him run the other way. No further engagement is necessary. You’ve done your part.

You probably have at least a couple of questions. Regarding Step 3, you may wonder, how is not responding at all outwitting someone?

The answer lies in stepping back into the intention of the exchange. If the intention of someone who’s difficult was to hurt you or even lash out due to his or own hurt, his intention is to share and spread pain. He wants the pain to continue. Any answer or response is adding fuel to the fire that you didn’t even start in the first place.

Don’t feed into the energy of that negative exchange.

You may also wonder, exactly, how to create this clear and concise comment as mentioned in Step 4. It’s all about patience, positivity, and planning. For your best interest. Hopefully, the time, space, and perspective you’ve allowed yourself will make that response clear to you. And, if not, enlist the help of a trusted outside source.

Talking to others about someone who’s been a jerk to you can act as a double-edged sword. It can either continue to stir things up (re-enacting the crime) or it can be focused on resolution. Make the latter your intention.

Here’s to Your Health

Hopefully, you can see how stepping back and disengaging from combative conversations can benefit your health. A compromised body already has enough to deal with without defending against the jerks of this world.

If you haven’t already – check out this recent article which shares a Quick Fix for Dealing with Stress.

I’ve felt this type of pain before.

It’s my goal to not allow these behaviors to affect my health.

What about you? Have others made comments that feel personal? Has your health suffered as a consequence?

You may have more questions on this touchy subject. You may have helpful thoughts to share on how to disarm a jerk. Or perhaps you live with someone who’s difficult at work or at home?

Please share your comments below and let us know your questions, tips, and strategies!

Deep Sleep for Under $20