10 Reasons Why We Hold Ourselves Back

Motivation: How to Create It 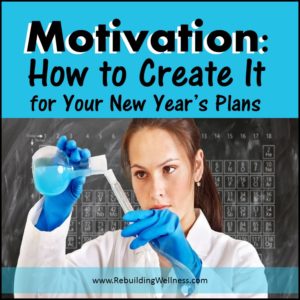 Do you have Snap-To-It Motivation? Can you create motivation? Are you able to conjure up the fortitude to stick with a new plan – no matter what? Sounds sort of angst-ey doesn’t it? The truth is, for those with fibromyalgia and chronic illness, you don’t need grit-your- teeth motivation to make changes in the New Year. All you need is to know HOW motivation can be created. Armed with this info, the world’s your oyster (or a chocolate bar if you prefer)!

Motivation isn’t something like the oil you add to your car to make it run. You’re not a quart low on motivation. What you are, is simply a bit deficient in clarity.

Do You Believe You’re Lacking in Motivation?

Motivation seems to be a limited commodity. Most people feel they either lack it entirely or want more of the little they do have. We state that a lack of motivation is to blame for not starting a body movement program. Or even considering tailoring one to suit our needs.

Do you buy into the scarcity model for viewing motivation? Is it something rare, out of reach, or in limited supply?

Here’s a favorite quote to nudge along a few thoughts on the matter:

“Motivation is what gets you started.
Habit is what keeps you going.” — Jim Ryan

I love this sentiment, but I think it leaves out one little, itty, bitty detail. Where does motivation come from in the first place? How do we get the oomph to start anything?

Where Does Motivation Come From and Can You Create Motivation?

I’m often asked to speak on this topic, so here’s how I describe it: Motivation is the flame that burns hot enough to create repeated action. And, don’t overlook the desire that sparks the flame in the first place.

What do you deeply desire? What dreams smolder in your inner thoughts? Do you crave a healthier body? Less pain? More energy? Clearer thinking? Amazingly, all of these can be considered as “side effects” of body movement. A regular fitness routine does more than tone muscles.

Too many people get caught up in terminology. For some, “exercise” and “fitness” are scary words. They bring to mind visions of people who are strangers to us. We have nothing in common with long, lean yoga instructors, buff bodybuilders, or not-an-ounce-to-be-spared distance runners. We could never be like that!

Why is it that we often jump to extremes when we object to an idea? We can’t imagine starting a fitness program, so we say we don’t want to become a slave to our workouts. Does it have to be one or the other? How about a compromise, say … something between a couch potato and a gym rat?

I often hear other objections, as well. Overwhelming pain. No energy. No money. No time. Not enough room, etc.

These were my thoughts, too, about a decade ago. I had to create and fan the flames of desire that eventually became my personal motivation. I realized that nothing happens without change. Was my current program of not exercising and not eating well working? No. Did I want to change? To be honest, no. But somewhere in my thoughts, I heard a little voice that said – something has to give. I didn’t think I was capable of moving my body every day, but I didn’t want to fail without even trying.

Building Motivation on Success for the New Year

I started by doing a few stretching exercises on the floor of my bedroom after getting dinner on the table for my kids. It was a “two birds with one stone” approach. I ate my healthier fare and left the dining room before I was tempted to eat what else was on my table (this was before I understood that healthy food is for everyone in my household!). I did the full body stretches for several months and then moved on to working out to some fitness DVDs from my local library. After six months or so, I joined a new gym that opened in my area. It had finally become a habit.

Here’s a vital fact to keep in mind when it comes to motivation:

Successes build on each other.

As I made the commitment to move my body daily (and followed through!), I began to feel better about myself. Sure, I did slowly drop pounds, but that wasn’t all. I found that my posture improved. I began to breathe more deeply. I experienced greater energy and surprised myself by experimenting with new and healthier foods. That inclination was a natural result of regular body movement (a.k.a. exercise).

Oh, and here’s the real kicker. For the first time in almost 20 years, I started to sleep through the night … and feel great the next day! I experimented with this, too. It became clear that my sleep patterns definitely reflected my movement patterns. On days that I skipped the gym, I didn’t sleep as well. That was proof enough for me. Over time, I developed my own “sweet spot” of what time to exercise (not too close to bedtime), and what type of exercises work best. I like variety.

(TIP: For a bit more on motivation when it comes to eating plans, check out this article about defining your WHY – HERE.)

So, I’m often asked, “Where can I find motivation?”

Where Does Motivation Hide?

It comes when you appreciate and become aware of the incremental successes you’re experiencing. The signs may be small. They may be almost indiscernible at times but stick with it. I promise you that motivation will arrive when it’s invited.

There’s much more to say about how to create and continue any healthy living program, but why not commit now – for the New Year – to starting your own routine? Having an awareness of your own potential is a great way to take steps toward a healthier future.

For now, I’ll end this article with another favorite quote.

“People often say that motivation doesn’t last.
Well, neither does bathing – that’s why we recommend it daily.” —Zig Ziglar

This article is my original work and first appeared at ProHealth.com. It is reprinted with their kind permission and may be viewed HERE.